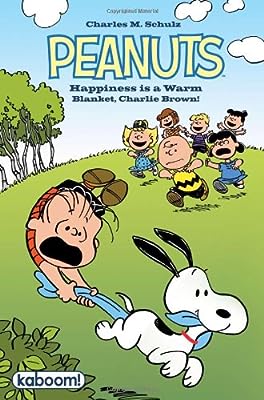 ‘ve just read (from a publisher-supplied PDF – the book hits comic book shops tomorrow and has a bookstore release date in two weeks) the graphic novel adaptation of Happiness is a Warm Blanket, Charlie Brown, and let me tell you – it works.

It works largely because they treat the special as what it was, a series of connected comic strips that tell a larger story among them. Most of the 80 pages of story in the book are single gag to the page, like a single daily strip a few are two gags, some bring a gag across two pages, but the rhythm is often like reading a good strip collection rather than reading a single narrative. By treating this as comics, they can actually convey humor through pacing and reaction. That puts this heads-and-shoulders above the typical prose-and-picture adaptation of animated works. And unlike some of the 1970s book adaptations of Peanuts, where they would have a series of panels but were simply recreating the visuals of the special, the people behind this clearly understand the difference between comics capturing a moment and animation capturing an action. They were clearly not tightly bound to the animated version, and cast aside animated moments for ones that work on the page. You could give this book to someone who has never seen the special, and have the book entertain on its own, something which is not true of most of the adaptations which have been done. And they didn’t make the mistake of trying to squeeze every moment of the special in, and thus allowed the gags the space they needed (mostly; there are a couple places where they tried to squeeze in one more than they should; the toss-away-the-blanket-but-it’s-on-a-string moment, for example, flops for a lack of timing on the page, but that is notable as the exception here.)

Artists Vicki Scott, Bob Scott, and Ron Zorman do a reasonable job copying a Schulz look with some of the visual touches of the screen version. It doesn’t all pass for exactly Schulz, but it’s not all supposed too, and there’s only a few moments where it’s jarring. Again, it works.

There are various ways of adapting a screenwork into comics, and various ways of crediting it. I’m not sure how much of the credit for “script”to  Stephan Pastis and Craig Schulz and for “art direction” to Paige Braddock and Andy Beall apply to the video version rather than the graphic novel, but it wouldn’t surprise me at all if they had a strong hand in this print version. Pastis and Braddock in particular are quite respectable cartoonist (Pastis for his strip Pearls Before Swine, and Braddock for Jane’s World, which has been both a strip and a comic book.)

In addition to the 80 page adaptations, there are several-pages of behind-the-scenes material at the end of the book, mostly character design materials.

I was lucky enough to find out with little warning the Tom Everhart, who has been doing fine-art paintings using Peanuts imagery for over thirty years now, was talking at a local small museum (small enough that it takes up a store space at the local mall. I’ve never met …

The final reflection on a decade

With the New Year just a few hours away, I think I can now with comfort announce that the Award for the Decade’s Most Inexplicable Error in a Book About Peanuts goes to: Out of respect for the publisher, who is taking corrections seriously, I will not name the offending …

Snoopy and the presidency

It’s presidential election season again. I’m not looking forward to this one, because California has moved its primary up enough so that now it actually plays a part in deciding candidates, which means that I’ll actually have to figure out who I’ll support. But it’s also bringing to mind a …

Listen to our weekly podcast for Peanuts fans via iTunes, Google Play Music, or the Stitcher app.

The history of the World Famous Beagle, in all his forms, with removable items for you to enjoy!