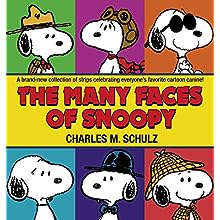 Many Faces of Snoopy, because I’ve been spending a lot of time reading the 24 hour comics made during 24 Hour Comics Day, as well as handling some of the preperations for Schulz’s Youth. And this is a thick book, 350 pages worth of strips about Snoopy in his roles as Joe Cool, the Legal Beagle, the Flying Ace, the Beagle Scout, the Literary Ace.

In terms of strips per buck, this works out pretty nicely, with two to four dailies or one Sunday strip (reprinted in black-and-white) per page. The layout… well, the pages with the dailies have the word SNOOPY in big block color letters repeated endlessly, which seems to be a bit too noisy and distracting. It’s not to the level where you can’t read the strips, just to the level that it might have been a bit better if they hadn’t included that element.

It’ll make a good gift fo the Snoopy fan, and there have already been separate books for most of these characters which could be used if you wanted a gift specifically for, say, a literary ace buff.
The book is now available for immediate shipment.

The Peanuts Every Sunday 1980s Box Set does well exactly what it’s supposed to do: reprint all of the Peanuts Sunday strips from the 1980s in full color over two hardcover volumes, encased in a decorative box. It is basically as good as you would want or hope this to …

There is nothing wrong with a cheaply produced paperback of public domain material. It can provice a service. For some material it’s the only way that product will be available. In the case of Charlie and Friends in Tip Top Comics – The Full Series Reader Collection, however, it’s the equivalent …

The book Peanuts Origami is designed for people who are not me, specifically people who are willing to rip pages out of a Peanuts book so that they can fold them into things. Maybe if I had three copies, I would do that for one. I shall not find out. But …