Charlie Brown off to Camp – review 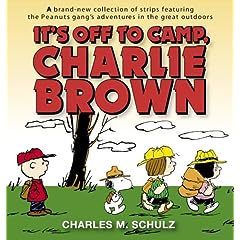 Anyway, “Camp” is the important word, as this book is a collection of strips about either going to summer camp or camping out with the Beagle Scouts. And it’s done in cooperation with the American Camp Association, who sprinkle the book with pages of recomendations for picking a good summer camp. This is sort of an odd collaboration, as roughly the first two thirds of the book are tales about the kids having a lousy time at camp or trying to get out of going to camp – not a real pro-camp sensibility here. (The last third focus more on romantic entanglements, notably with campers Marcie and Peppermint Patty vying for Charlie Brown’s attention, reminding us that the lack of love in Charlie Brown’s life arose not so much from there being none available for him, but from his obliviousness to its existence.)

The material reflects the same style of editorial choices we’ve seen in other recent Ballantine volumes, with individual vaguely camp-related (or at least camp-mentioning) strips in some cases, and incomplete storylines in others. There are a couple blatant examples of the latter; the story where Charlie Brown gets and oddly-shape rash and covers it up by putting his head in a sack is started when he is already on his way to camp, besacked, and thus may confuse people who don’t already know the story. We have segments of the Peggy Jean (the gal who calls CB “Brownie Charles”) story, but only get one strip where she actually appears. And my personal favorite camp storyline, when the kids attend a religious camp where the views are more severe than sincere, isn’t represented at all.

The entire book is printed in color, but none of the strips are. The color is all used for the background decoration (a bit distractive) and the camp information pages. Each page has either one Sunday strip or one to three dailies, so that most pages expend more space on the background wallpaper pattern than on the material that you’re actually there to read.

But hey, that’s the presentation. The strips are the strips. They don’t cover the whole run of the strip, going back only to the 1960s. But there’s plenty of good stuff here with lots of humor – probably at its best when the characters are at their unhappiest, stuck in a camp away from everything they want. (And hey, I get a good chuckle over Peppermint Patty’s frustrations over other girl’s interest in ol’ Chuck.) There is a bit of repetitiveness, but not as much as in some of the themed collections. If you’ve got someone for whom camp is a part of their life, they’ll probably get even more milage out of this.

(Meanwhile, we’ve gotten some good entries for the contest, but I still want a lot more. C’mon, a set of three robust hardcover volumes in Italian would be a keen thing to display.)

There is nothing wrong with a cheaply produced paperback of public domain material. It can provice a service. For some material it’s the only way that product will be available. In the case of Charlie and Friends in Tip Top Comics – The Full Series Reader Collection, however, it’s the equivalent …

The book Peanuts Origami is designed for people who are not me, specifically people who are willing to rip pages out of a Peanuts book so that they can fold them into things. Maybe if I had three copies, I would do that for one. I shall not find out. But …

I just received the new pop-up book adaptation of A Charlie Brown Christmas, and we have a real winner here. No, this isn’t a reprint of the old Running Press pop-up version. And it certainly isn’t last year’s Hallmark version with just one single pop-up at the end. No, this …