Given that it seems to be book-banning season again, I thought I’d double-check that I covered when the Texas prison system had banned a Peanuts book I wrote. I had, and I even covered how they’d banned A Charlie Brown Christmas. But I started to wonder whether there were Peanuts books that they hadn’t banned. After all, they might have trouble if one of the prison gangs went up against the Peanuts gang, right? Well, they do approve a lot more books than they ban (it makes for a big ol’ spreadsheet), and there were plenty of Peanuts books to be found. There were Peanuts strip books, whether old Fawcett Crest paperbacks like Hey, Peanuts! or volumes of The Complete Peanuts (including the one that I helped put together, volume 26

.) There were Peanuts history books like the biography Schulz and Peanuts

.  There were activity books like Snoopy Loves to Doodle

. And I gotta reckon that if they’re on the approved list, they are books that some prisoner at some point requested.

I can’t imagine Texas prisoners get a lot of opportunity to do casual cooking, nor that they are supposed to have an organic dog on site that they are allowed to feed. But having reviewed that book,  I remember one thing about it: it came with a set of cookie cutters. 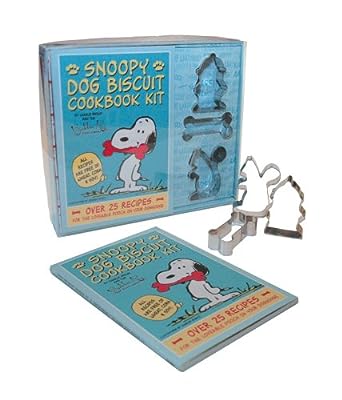 I presume that the prison separated the book from the rest of the kit. Because while “cookie cutters” may not be one of the more damaging items with “cutter” in the name, I still hate to think of a convict coming out of a brawl with squirrel-shaped chunks taken out of their hide.

The AAUGH Blog: Thinking about these things so that you don’t have to.

I just paid full cover price for copies of two books that I myself had written, just trying to find out whether Hallmark had, as they sometimes do, gotten their own printings of the books with a Hallmark gold crown logo on them. And it would’ve been worth it had …

In recent weeks, I’ve added two kinda-books to the AAUGH.com Reference Library. I talked about The Great Big Book of Peanuts Word Seeks volume 1 when I ordered it. Each of its 129 themed word search puzzles had below it a Peanuts strip on the same theme — if the …

I put some effort into getting all the Peanuts books released in the United States… yet sometimes I miss one. For example, I missed this deluxe songbook that came out last year. How did I miss this? Well, even though it was not distributed through the normal book distribution routes, …