Usually I prefer to write my own write-ups off of press releases, but life is full, my hand is in pain, and I want to get this out. Soooo…..

Lift Off with SNOOPY: A BEAGLE OF MARS 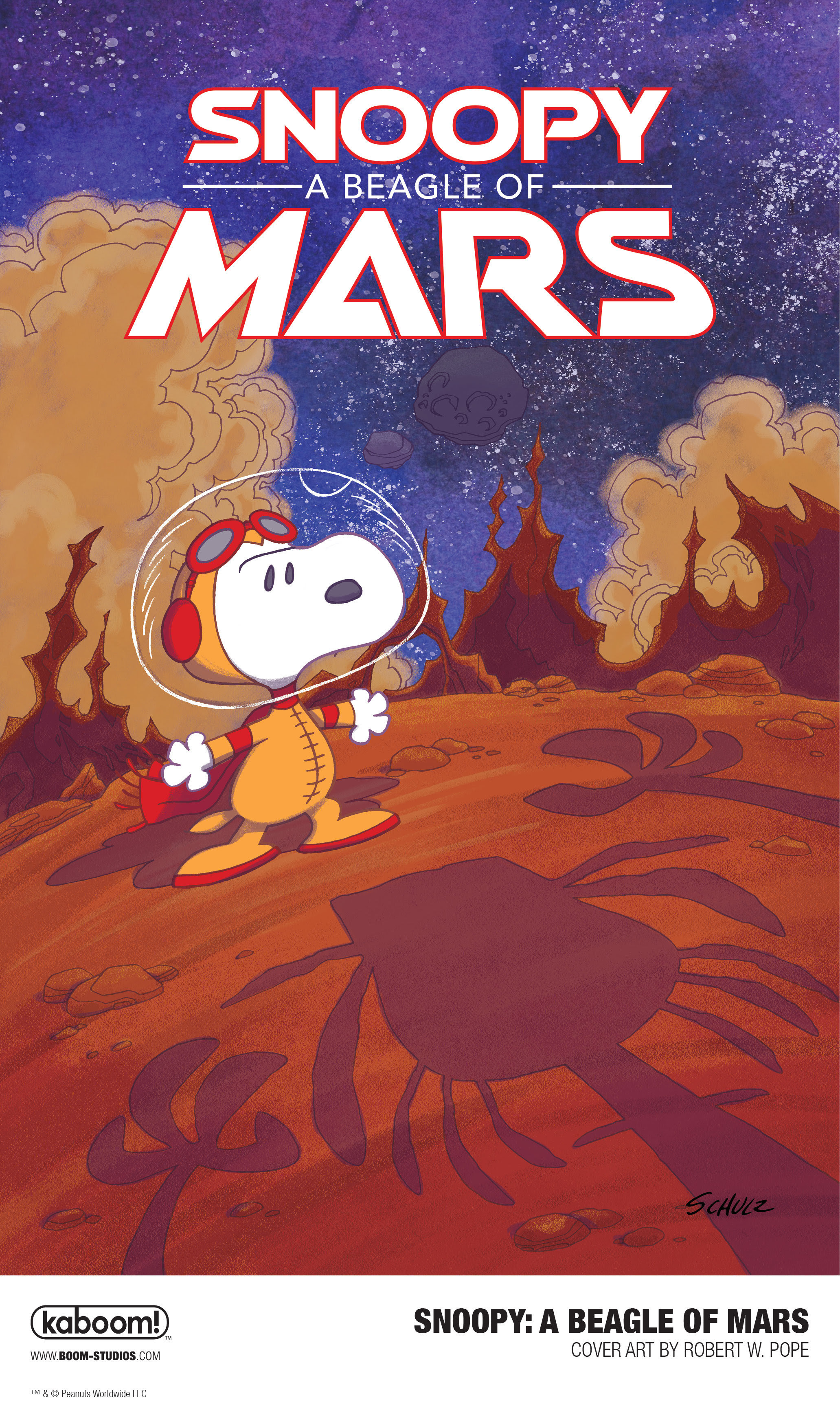 LOS ANGELES, CA (July 15, 2019) – BOOM! Studios today announced SNOOPY: A BEAGLE OF MARS, an all-new original graphic novel in partnership with Peanuts Worldwide, that launches the world’s most beloved beagle on his grandest adventure yet! From Flying Ace to Astronaut in Space, Snoopy embarks on an exploratory mission to Mars in this original graphic novel written by Jason Cooper, illustrated by Robert Pope and colored by Hannah White, and available in stores December 2019.

NASA has shared a proud association with Charles M. Schulz and his American icon Snoopy since Apollo missions began in the 1960s. In May 1969, Apollo 10 astronauts traveled to the Moon with the aid of a lunar module named Snoopy and a command module named Charlie Brown. That was also the year of the first Silver Snoopy Award — given by NASA astronauts to employees and contractors for outstanding achievements related to human flight safety or mission success. Fifty years after their first collaboration, Peanuts Worldwide and NASA entered into a multiyear Space Act Agreement in 2018, engineered to inspire a passion for space exploration and STEM education among students.

In SNOOPY: A BEAGLE OF MARS, Snoopy, the world-famous astronaut, heads to the stars in his most out-of-this-world adventure yet! What mysteries does the red planet hold? Will he find water? Will he find life?  Will he find the time to get in a quick nine holes? Snoopy grabs his golf clubs and blasts off for Mars in this original graphic novel from the world of Charles M. Schulz and Peanuts!

“Sharing a love of STEM and space exploration through the beloved Astronaut Snoopy is a great honor for us.” said Craig Herman, Senior Director, Category Management, Peanuts Worldwide. “Charles Schulz inspired generations through his comic strip and characters, and I hope this graphic novel will spark the imagination of many future scientists and space travelers.”

Charles M. Schulz once described himself as “born to draw comic strips.” Born in Minneapolis, at just two days old, an uncle nicknamed him “Sparky” after the horse Spark Plug from the Barney Google comic strip, and throughout his youth, he and his father shared a Sunday morning ritual reading the funnies. After serving in the Army during World War II, Schulz’s first big break came in 1947 when he sold a cartoon feature called Li’l Folks to the St. Paul Pioneer Press. In 1950, Schulz met with United Feature Syndicate, and on October 2nd of that year, PEANUTS, named by the syndicate, debuted in seven newspapers. Charles Schulz died in Santa Rosa, California, in Feburary 2000 — just hours before his last original strip was to appear in the Sunday papers.

Jason Cooper is head writer at Charles M. Schulz Creative Associates where he has written storybooks, comic books, and graphic novels for PEANUTS. He relates to Charlie Brown much more than a person should.

Cartoonist and animator Robert W. Pope has the greatest of fun drawing the PEANUTS gang for BOOM! Studios. Over the years he’s also drawn the adventures of the Looney Tunes gang, Scooby-Doo, the Powerpuff Girls, Johnny Bravo, and many more for DC, IDW, Disney Publishing and more.

“All systems are go in a Snoopy adventure unlike anything you’ve ever read before, introducing everyone’s favorite beagle to the wonders of outer space as he journeys to Mars.” said Chris Rosa, Editor, BOOM! Studios. “The Schulz Studio team has crafted a wonderfully fun and humorous tale so whether you’re a kid or just a kid at heart, this is the kind of story that reminds you why Peanuts has such an unparalleled place in pop culture.”

SNOOPY: A BEAGLE OF MARS is the latest release from BOOM! Studios’ award-winning KaBOOM! imprint, home to comics for middle grade and younger readers including licensed series such as Adventure Time, Steven Universe, Regular Show, Ben 10, and Over The Garden Wall, along with original series like Just Beyond: The Scare School by R.L. Stine and Kelly & Nichole Matthews, Hex Vet by Sam Davies,RuinWorld by Derek Laufman, and Pandora’s Legacy by Kara Leopard, Kelly & Nichole Matthews.

Print copies of SNOOPY: A BEAGLE OF MARS will be available for sale in December 2019 at local comic book shops (use comicshoplocator.com to find the nearest one), bookstores and the BOOM! Studios webstore. Digital copies can be purchased from content providers, including comiXology, iBooks, Google Play, and the BOOM! Studios app. 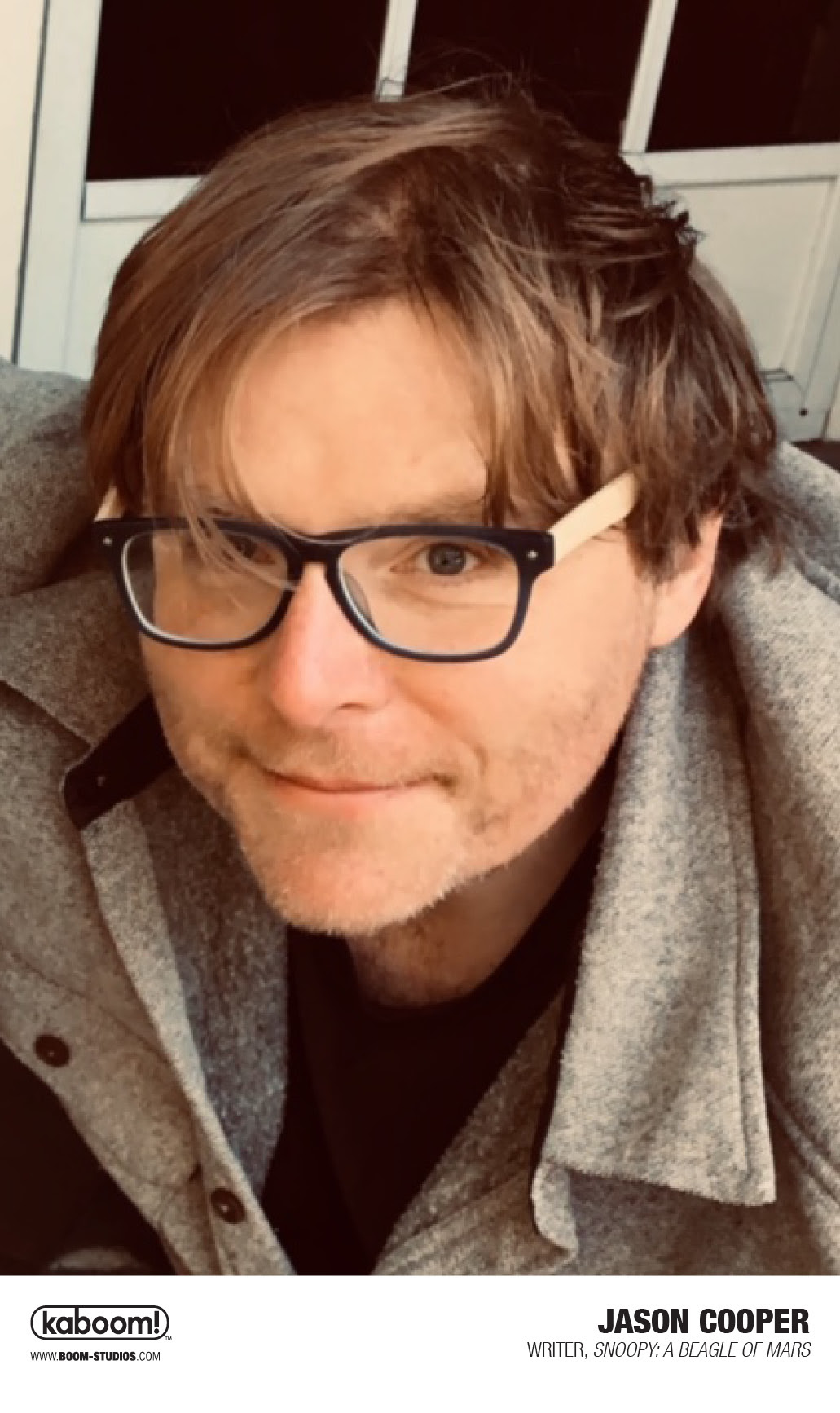 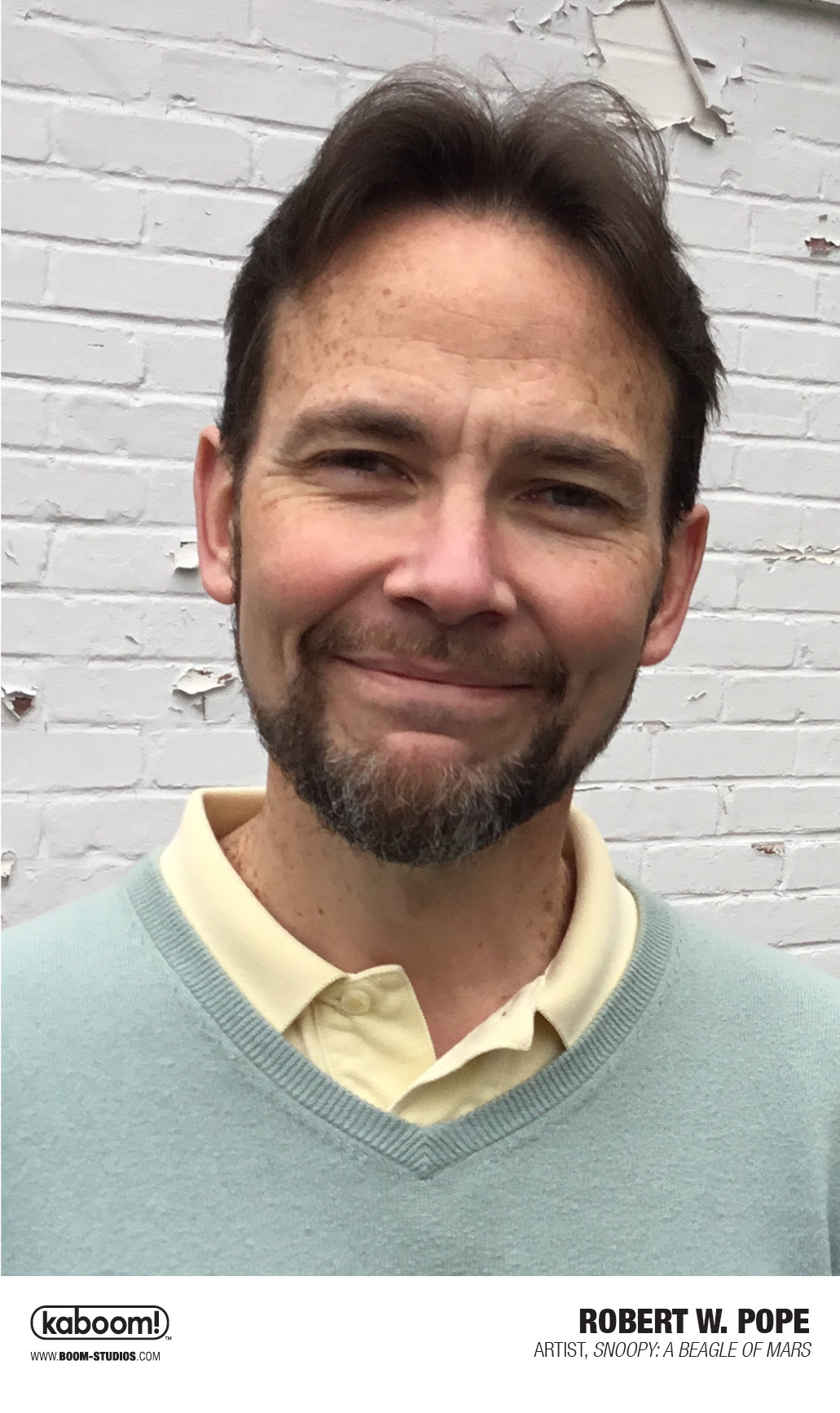 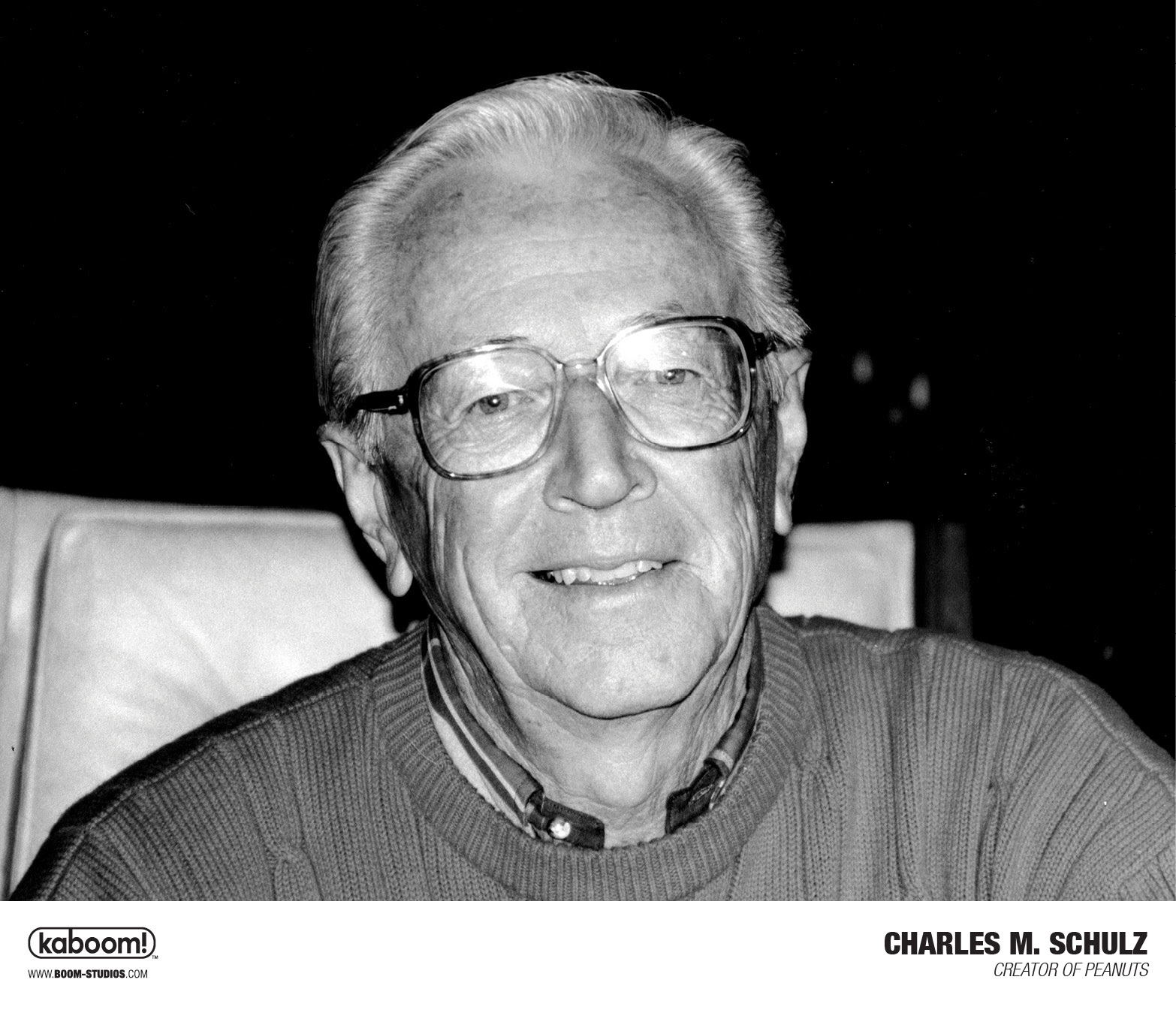 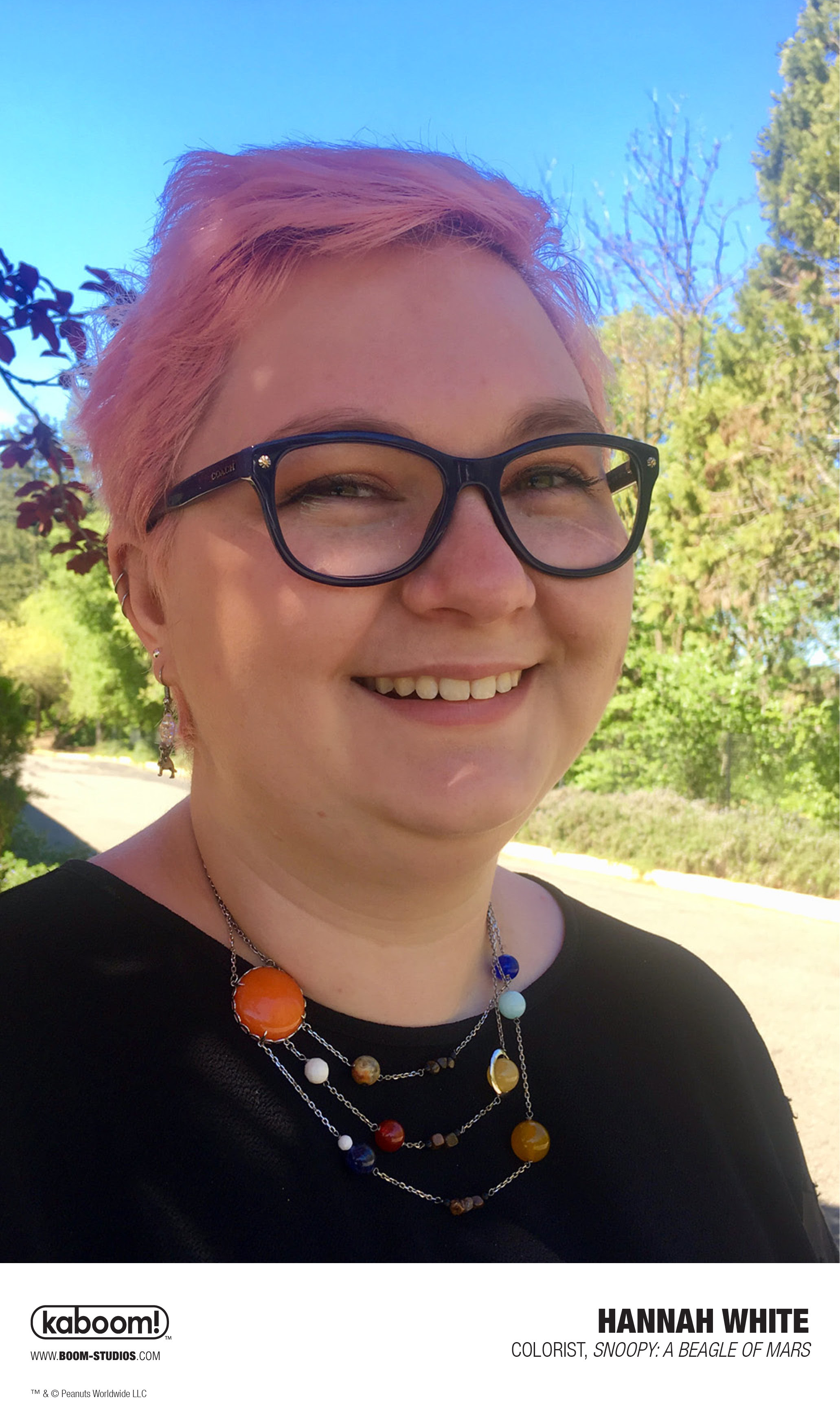 ABOUT PEANUTS WORLDWIDE
Charles M. Schulz first introduced the world to the Peanuts characters in 1950, when the Peanuts comic strip debuted in seven newspapers. Since then, Charlie Brown, Snoopy and the rest of the Peanuts gang have made an indelible mark on popular culture. Peanuts animated specials and series air on major networks and streaming services, including ABC, Cartoon Network and Boomerang in the U.S., Family Channel in Canada, and the WildBrain network on YouTube worldwide. Fans also enjoy Peanuts through thousands of consumer products around the world, amusement parks attractions, cultural events, social media, and a daily comic strip available in all formats from traditional to digital. In 2018, Peanuts partnered with NASA on a multi-year Space Act Agreement designed to inspire a passion for space exploration and STEM among the next generation of students. The Peanuts characters and related intellectual property are 41% owned by DHX Media (TSX: DHX, NASDAQ: DHXM), 39% owned by Sony Music Entertainment (Japan) Inc., and 20% owned by family of Charles M. Schulz.

ABOUT BOOM! STUDIOS
BOOM! Studios was founded by Ross Richie in 2005 with the singular focus of creating world-class comic book and graphic novel storytelling for all audiences. Through the development of four distinct imprints—BOOM! Studios, BOOM! Box, KaBOOM!, and Archaia—BOOM! has produced award-winning original work, including Lumberjanes, The Woods, Giant Days, Klaus, and Mouse Guard, while also breaking new ground with established licenses such as WWE, Mighty Morphin Power Rangers, Cartoon Network, and The Jim Henson Company properties. BOOM! will also bring their original series to life through unique first-look relationships with 20th Century Fox for film and with 20th Television for the small screen. Please visit www.boom-studios.com for more information.

I put the “facts” in “factsimile”!

Titan Books has announced an April release for a facsimile edition of 1965’s Sunday’s Fun Day, Charlie Brown. It’s described as “The 11th Facsimile edition of the original 1960 classic Peanuts paperbacks first published in 1965 featuring 126 Sunday Peanuts newspaper strips from 1962-1965.” I have a couple of things …

The intended cover image for What Cartooning Really Is, Fantagraphics upcoming collection of interviews with Schulz, has been updated. It is no longer going to look like this: It is now slated to look like this: By the way, if you ordered this book from Amazon and received a cancellation …

Finally available for pre-order is The Complete History of Peanuts on Parade: A Tribute to Charles M. Schulz: Volume One: The St. Paul Years. This is, in addition to being a book with three colons in its title, a photo-heavy history of the projects where various artists customized Peanuts statues and …